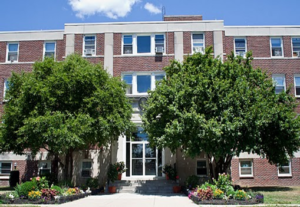 Self Help Movement, Inc. was founded in 1967 by Dr. Joseph F. Ruggiero as an outpatient drug rehabilitation program for probationers/parolees. By the early 1970’s the need for an inpatient program became apparent. A search led to a small building, at Byberry State Hospital called the “Farmhouse”. Many hundreds of hours of volunteer labor transformed the old, dilapidated building into “Self Help”. The facility then housed 16 residents who received intense drug and alcohol counseling and rehabilitation.

In 1975, the need for growth led Dr. Ruggiero, along with the Honorable James Cavanaugh, to petition the state to lease a small residential center for drug abusers on the grounds of the Philadelphia State Hospital at Byberry.  A larger, three-story building was secured on the Byberry grounds with a capacity for 40 residents.  In addition to the residential treatment program, the new building housed a halfway program for graduates as well as administrative services for the newly incorporated Non-Profit.

In 1982, negotiations were initiated with the State Hospital for a long-term lease in a newer and more efficient building on the hospital grounds.  On July 29, 1983, the Self Help Movement, Inc. leased the Daniel Blain Complex, which included three buildings and comprises the facility as it is known today.

On May 18, 1988 the deed transferring the five acre complex with buildings from the state to Self Help Movement, Inc. was completed.

Commencing in the 1980’s until 2008, Dr. Ruggiero had written and directed clients of Self Help in an annual play. Until destroyed by fire in 1994, the annual play and dinner was held at Palumbo’s the esteemed institute and Philadelphia landmark. Dr. Joe’s plays continue to inspire and brighten the lives of those who participated as well as those who enjoyed their presentations.

Judge James Cavanaugh, Edward Blake and Jerome Zaleski, as Chairman’s of the Board, led Self Help to continue to grow and serve the needs of clients. Thousands of individuals have successfully graduated our program, passing through our doors to become productive members of society.

In January 2010, Dr. Ruggiero’s retirement was official. His years of service as founder, inspirational and spiritual servant to the men who walked through the doors of Self Help will never be forgotten.

Robert N. Dellavella, J.D. assumed his duties as CEO with a seamless transition for both staff and clients. His ideas for growth and development at Self Help have been well received and implemented with a seemingly effortless style. This is due in part to an almost lifetime involvement Robert has had with Self Help, starting in the 1980’s as he worked alongside his father, Nick Dellavella.  Nick Dellavella played a major role in the growth of Self Help, in the 1980’s and 1990’s through his position as Administrator and Director of Maintenance of the property and advisor to Dr. Ruggiero. Following the early years, Bob returned working diligently as a member of the Board of Directors becoming Chairman of the Board and then progressing to his current position as Chief Executive Officer. Robert’s goals are to expand the facility by rehabbing unused building space in need of renovation. This will hopefully be accomplished with grants, fundraising efforts and the will and dedication of all of the people who care about Self Help. The expansion will provide the clients we serve with additional bed space, counseling support, educational and vocational programs and other auxiliary services. Furthering our goal of helping the drug and alcohol addicted help themselves to conquer their disease and become productive members of society.

Our new Board Chairman, Millard Sutton continues in the tradition of guiding the program through its new challenges, goals and expectations.